04. The DHT: A Public Distributed Database¶

Agents share their public keys, source chain headers, and public entries with their peers in a distributed hash table (DHT). This distributed database provides redundancy and availability for data and gives the network the power to detect corruption.

If you’re unsure whether a distributed network can provide the same integrity, performance, and uptime guarantees as a server-based system under your control, this article will give you a better picture of how Holochain addresses these issues. You’ll also have a better understanding of how user data is stored, which will help you think about how to design your persistence layer.

Let’s talk about your source chain again. It belongs to you, it lives in your device, and you can choose to keep it private.

However, the value of most apps comes from their ability to connect people to one another. Email, social media, and team collaboration tools wouldn’t be very useful if you kept all your work to yourself. Data that lives on your machine is also not very available—as soon as you go offline, nobody else can access it. Most users don’t want to run their own servers, so there needs to be a way to make public data stick around.

This is also the point where we run into integrity problems in a peer-to-peer system. Unfortunately, when everybody is responsible for their own data, they can mess around with it any way they like. In the last article, we learned that the signed source chain is resistant to third-party tampering, but not to tampering by its owner. An agent could erase a transaction or a vote and make it look like it never happened.

And finally, it seems inefficient to make each node check the correctness of every piece of data they encounter. Surely we could speed things up if we know that multiple people were accessing the same piece of data. 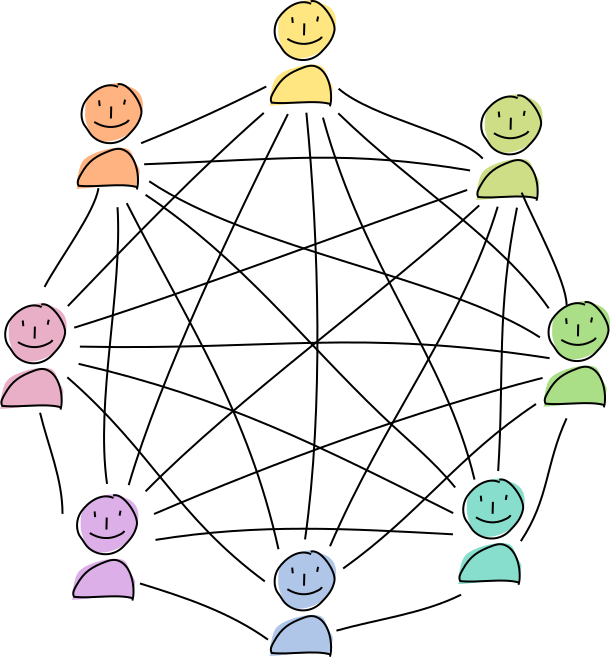 In a Holochain network, you share your source chain headers and public entries with a random selection of your peers, who witness, validate, and hold copies of them. 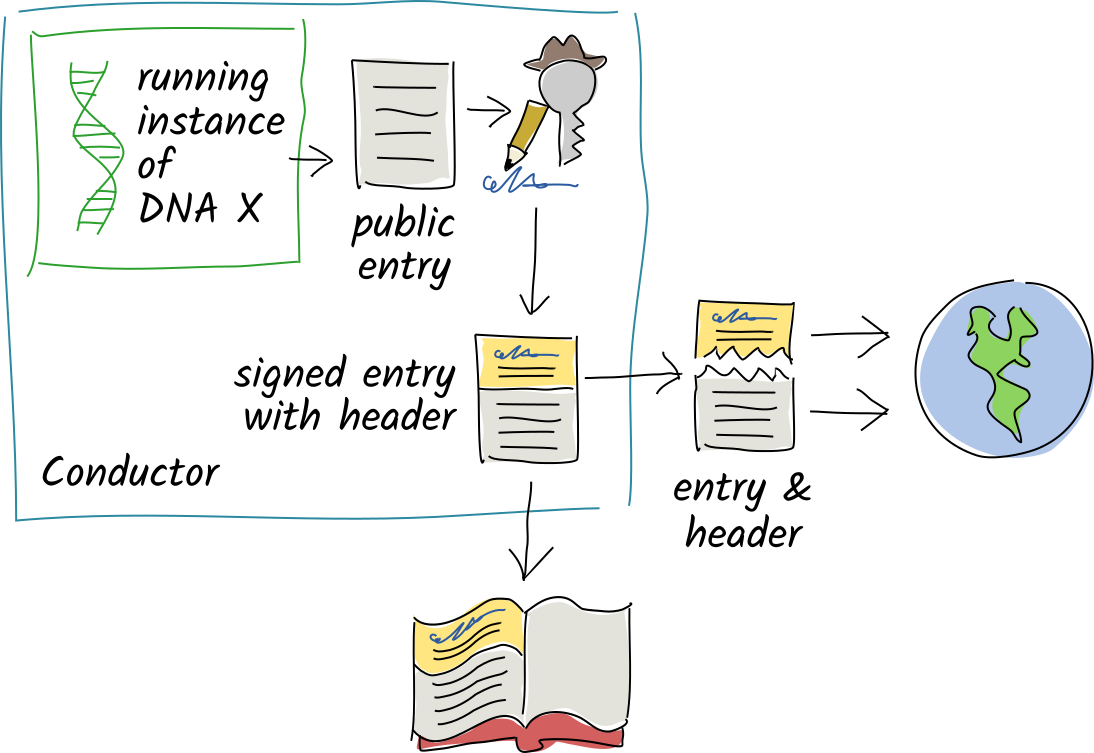 When you commit a private entry, it stays in your source chain, but its header is still shared. 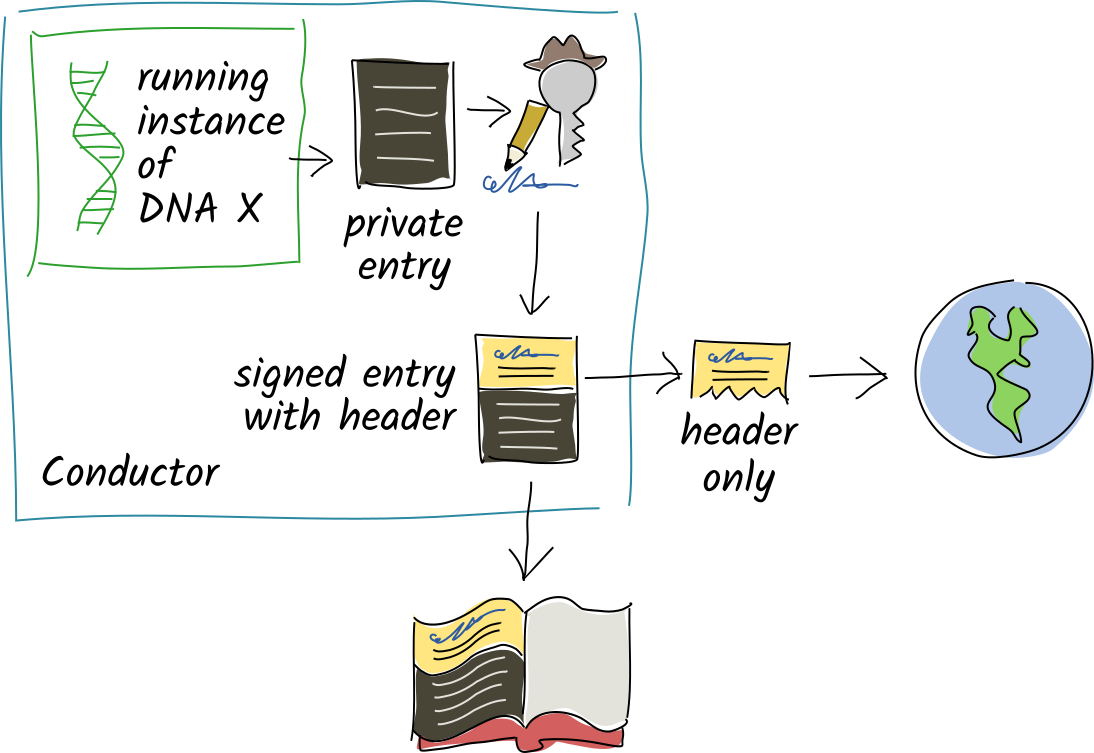 Every DNA has its own private, encrypted network of peers who gossip with one another about new peers, new data entries, invalid data, and network health.

This network holds a distributed database of all public data called a distributed hash table (DHT), which is basically just a big key/value store. Each node holds a small shard of the DHT, so the burden of participation isn’t painful.

Finding peers and data in a distributed database¶

Distributed databases have a performance problem: unless you have time to talk to each node, it’s very hard to find the data you’re looking for. Here’s how DHTs handle this:

Every node knows about its neighbors and a few faraway acquaintances. Using these connections, they can find any other node in the DHT with just a few hops. This makes it fairly quick to find data. 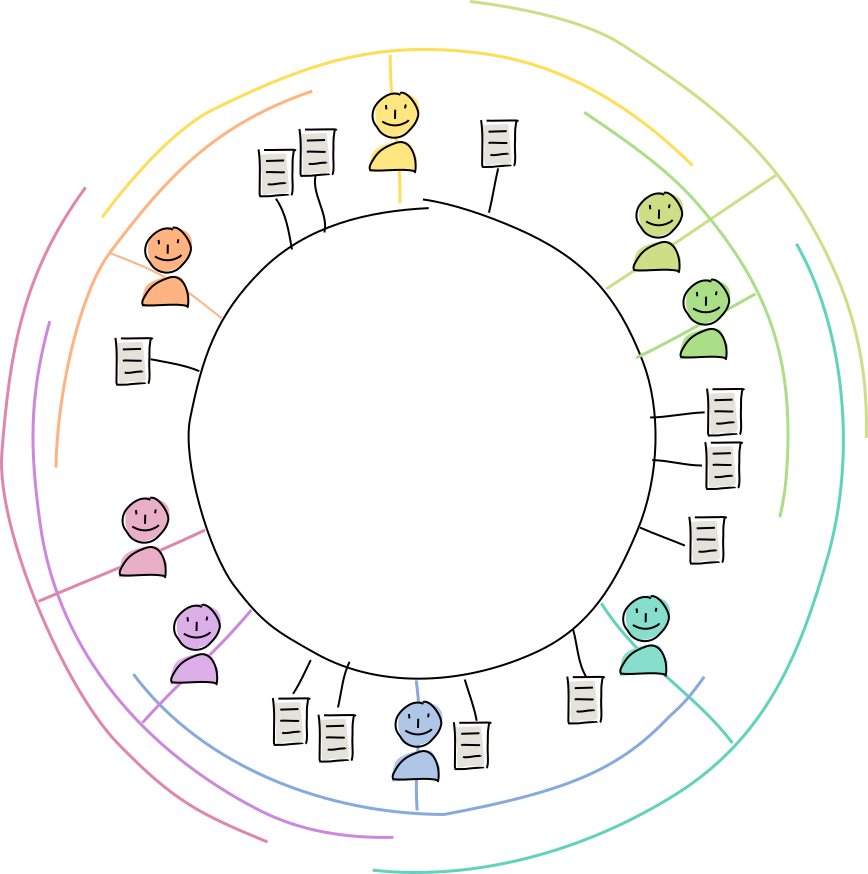 Let’s see how this works with a very small address space in which the addresses are letters of the alphabet.

The DHT stores multiple redundant copies of each entry so that the information is available even when its author, or some of its validators, are offline. This allows others to access it whenever they need to.

It also helps an application tolerate network disruptions. If your town experiences a natural disaster and is cut off from the internet, you and your neighbors can still use the app. The data you see might not be complete or up to date, but you can still interact with one another. You can even use the app when you’re completely offline.

Let’s see how this plays out in the real world. 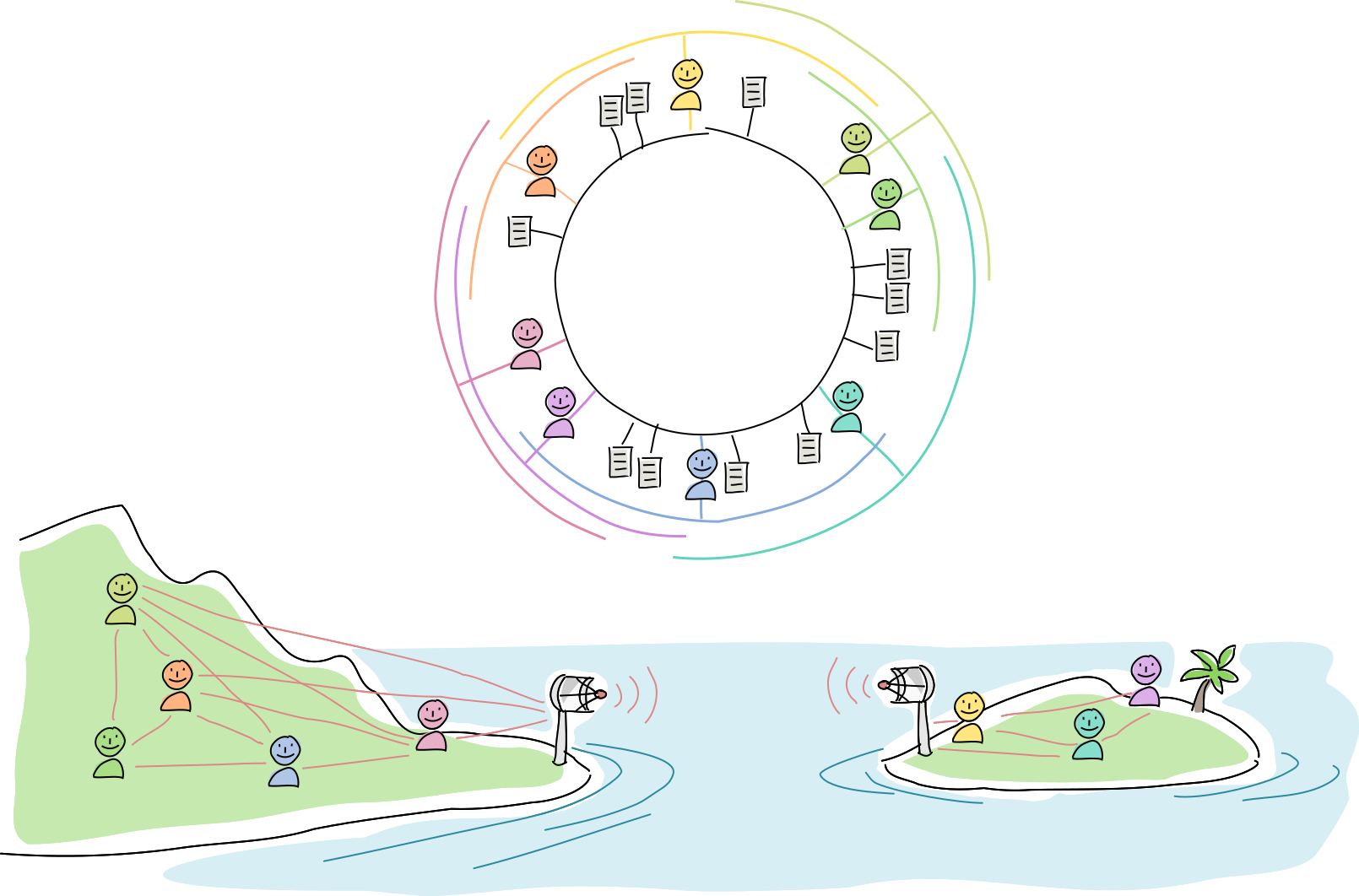 1. An island is connected to the mainland by a radio link. They communicate with each other using a Holochain app. 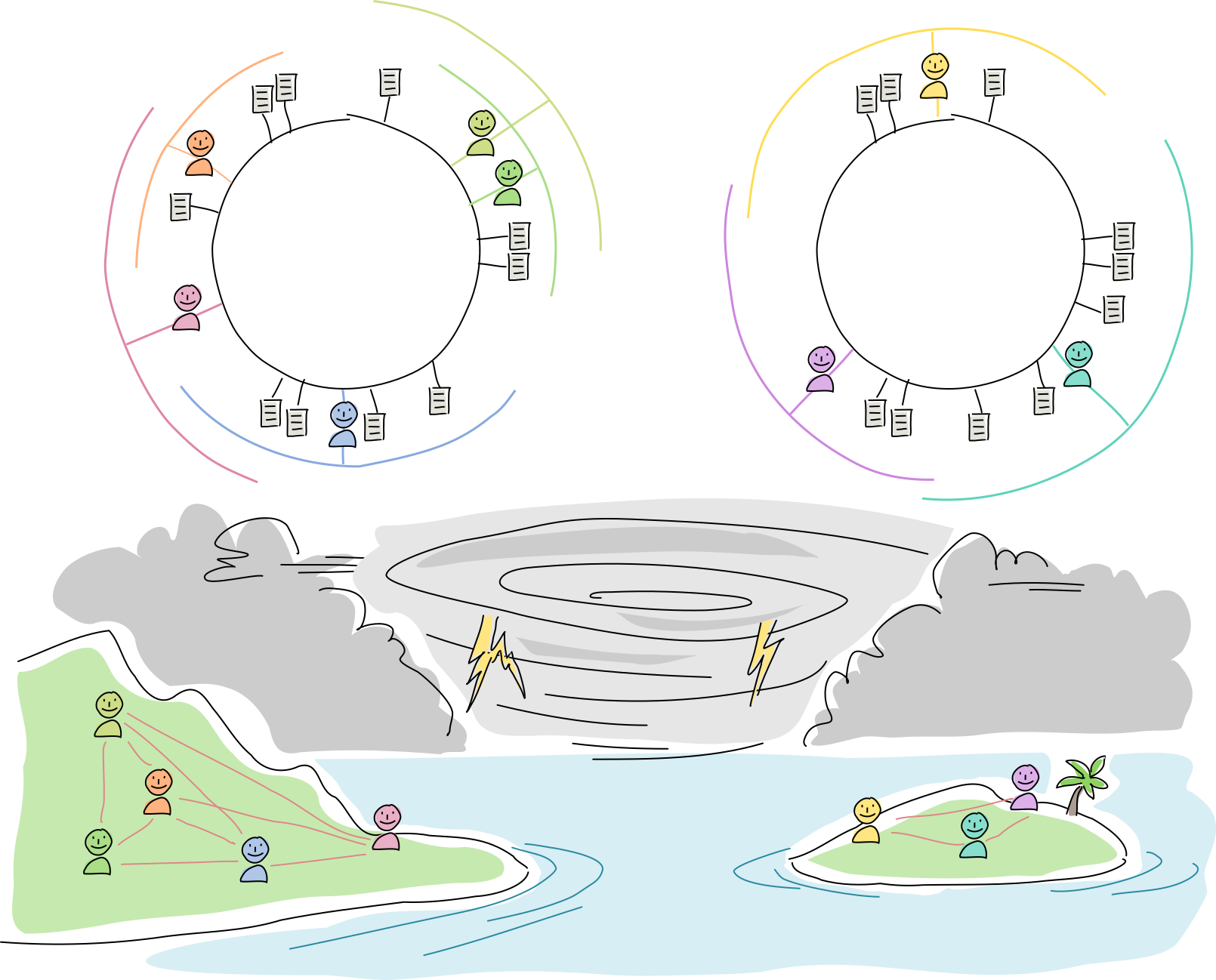 2. A hurricane blows through and wipes out both radio towers. The islanders can’t talk to the mainlanders, and vice versa, but everyone can still talk to their physical neighbors. None of the data is lost, but not all of it is available to each side. 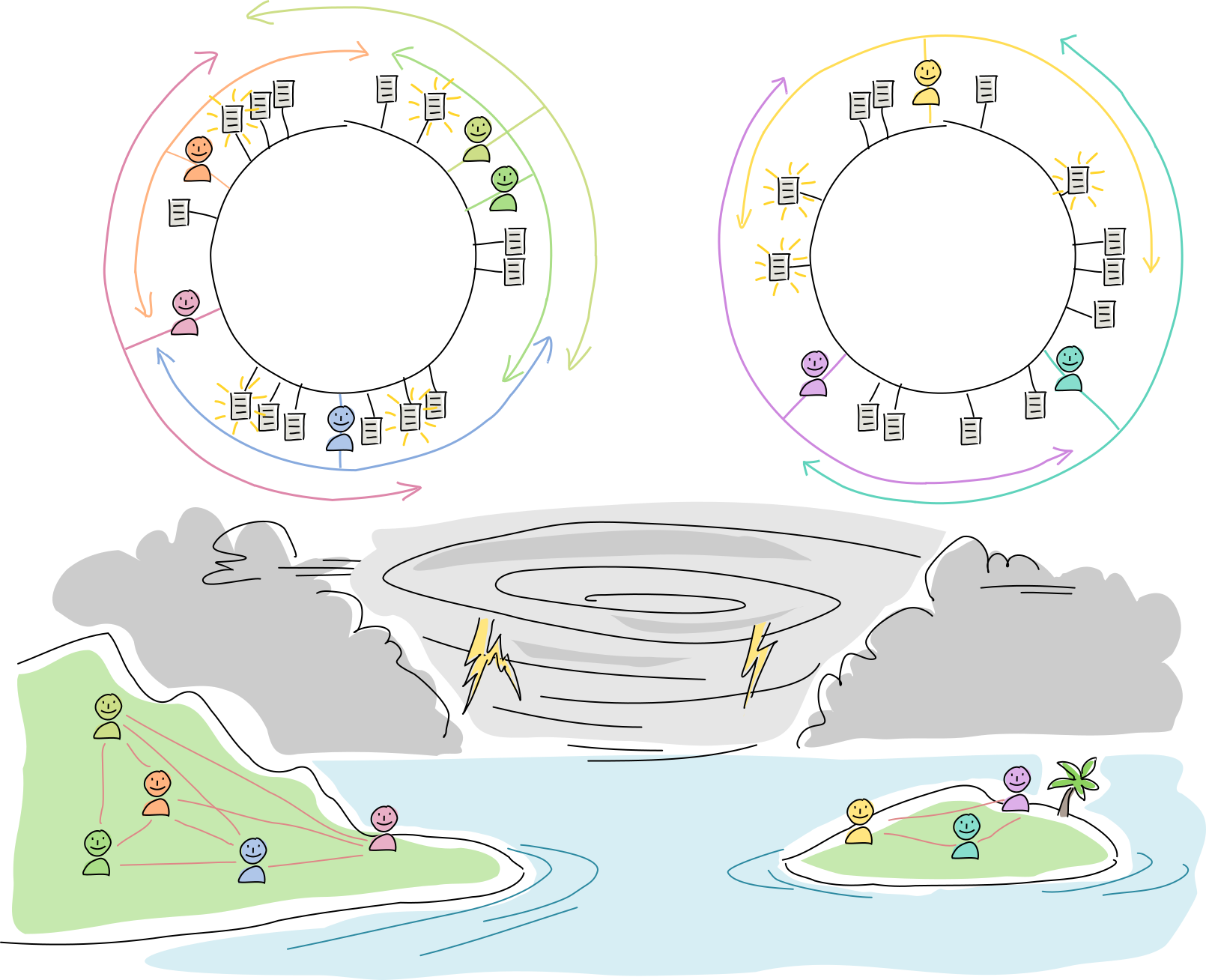 3. On both sides, all agents attempt to improve resilience by enlarging their DHT neighborhoods. Meanwhile, they operate as usual, talking with one another and creating new entries. 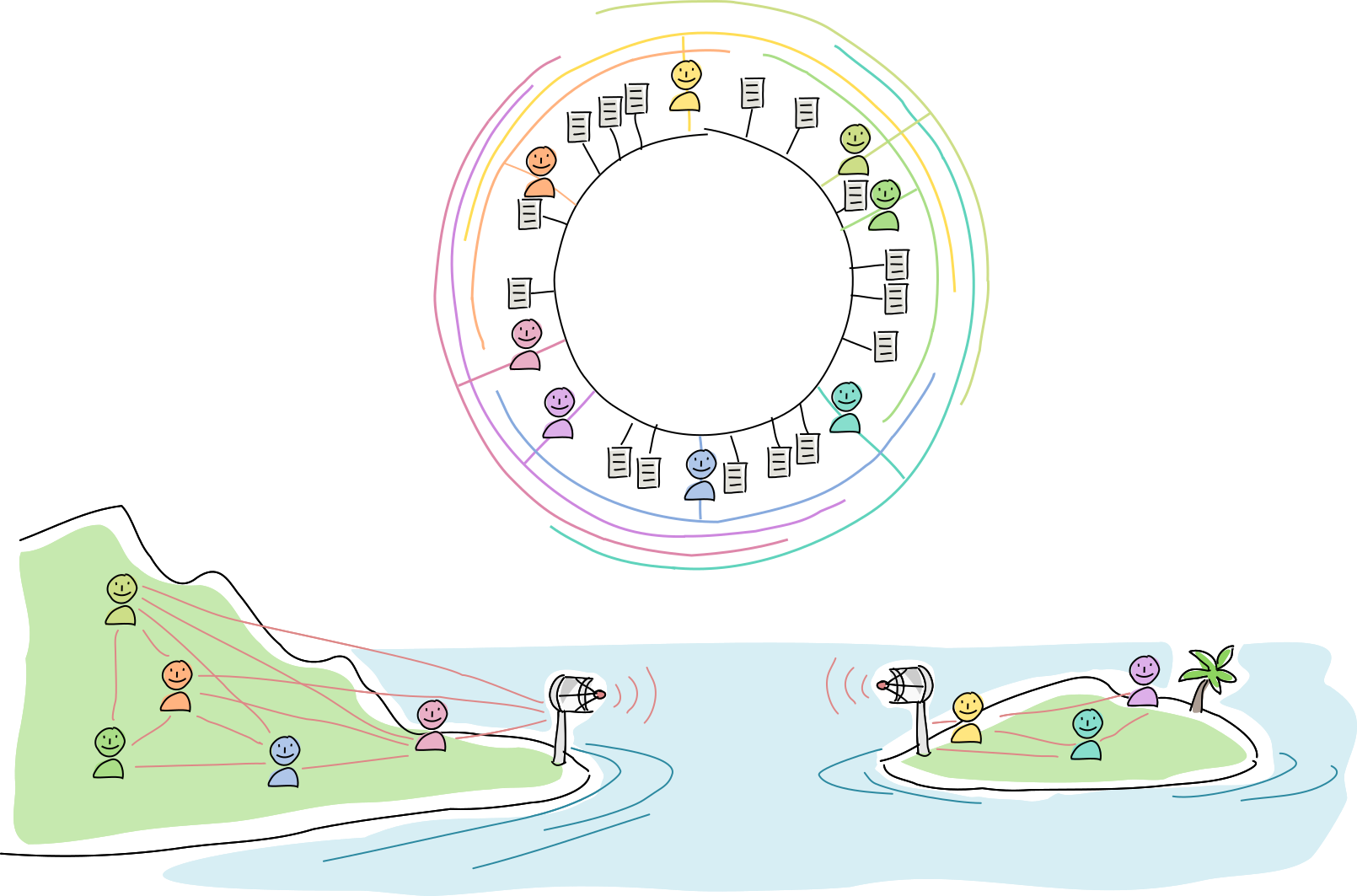 4. The radio towers are rebuilt. The network partition ‘heals,’ and new data syncs up across the DHT.

When we laid out the basics of Holochain, we said that the second pillar of trust is peer validation. When a node is asked to store an entry, it doesn’t just store it—it also checks it for validity. As the entry is passed to more nodes in its neighborhood, it gathers more signatures attesting to its validity.

Before storing an entry or header, a validator checks that:

If any one of these checks fails, the validator marks the entry invalid and spreads news about the agent’s activity to its neighbors. This is what creates Holochain’s immune system.

Using a hash as an address has a nice side benefit—entry addresses are random. Node addresses are also random, which means that validator selection is impartial and resistant to collusion. It also distributes the data load fairly evenly around the DHT.

The important thing is that the DHT remembers what you’ve published, so it’s very hard to go back on your word. Validation is a very important part of a DNA—perhaps the most important part. We’ll talk more about it in a later chapter.