Immutable public data is a surprising feature of Holochain and many other distributed systems. It’s important to understand the consequences in order to make informed design decisions that respect your users’ privacy and storage space. 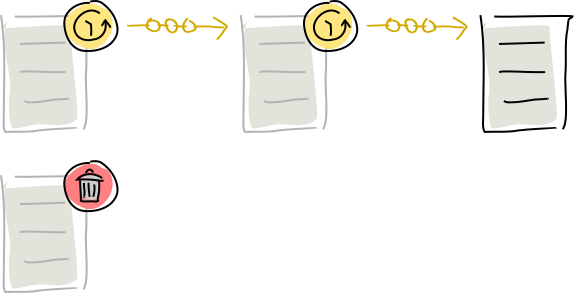 Data in a Holochain app is immutable for a few reasons:

However, developers expect to be able to do CRUD (create, read, update, delete) as a basic feature of a database; it’s an important part of most apps. So how do we do it on Holochain?

The answer is that we leave the old entries in place, write new entries, and add a piece of metadata onto the originals to indicate their status. Holochain features two special entry types to do this for you:

This can break users’ expectations. When you asks a central service to delete information you’d rather people not know, you’re trusting the service to wipe it out completely—or at least stop displaying it. When your data is shared publicly, however, you can’t control what other people do with it.

In reality, this is true of anything you put on the internet. Even when a central database permanently deletes information, it can live on in caches, backups, screenshots, public archives, reading-list apps, and people’s memories.

Holochain is a little different because it’s explicit about data immutability. Here are some guidelines for wielding this tool wisely:

Because data takes up space even when it’s no longer live, be judicious about what you commit to the source chain and the DHT: